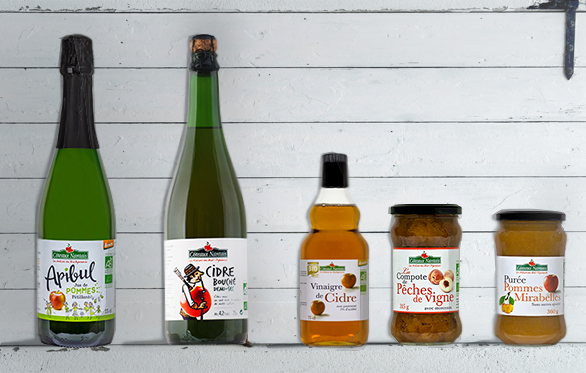 Les Coteaux Nantais now has 6 biodynamic orchards, in which they produce their own fruits which is used for the realization of their entire product range.

The company offers a range of organic products today become essential in France. We currently support the company recognized in France, on its development in Germany.

Les Coteaux Nantais was created in 1943 by Jacques Moreaux, with only 2 hectares of orchard. Since 1943, the company has been able to innovate and adapt permanently to its needs.  Since 1999, Coteaux Nantais are managed by Benoît Van Ossel, Robert Dugast and Michel Delhommeau. 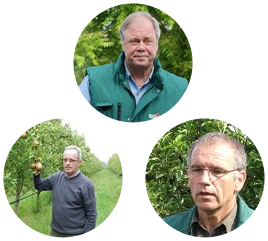 In 1968, Coteaux Nantais spend all their culture in organic. This really difficult period for the brand has been overcome. Indeed, the company was confronted with a loss of nearly 80% of its production due to the cessation of treatments and maggots due to carpocapses. In the 70s, a trip to Switzerland allowed them to develop a solution to fight against the development of this butterfly and these maggots. Finally, the company made cider with the worm apples, in order to reuse them.

In 1995, Coteaux Nantais decided to transform all their orchards into a biodynamic orchard. 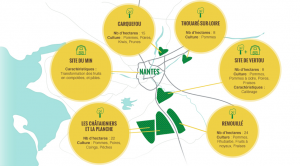 Biodynamic agriculture doesn’t use chemical fertilizers, pesticides, but also herbicides. Preparations based on minerals and plants such as compost are used. In biodynamics, the land, the plants and the integration of wildlife are the essential elements. The main objective is to reconstitute a rich and diverse landscape. Currently, Coteaux Nantais are setting up biodynamics on their new orchard in Remouillé, and are thinking about the type of animals to incorporate in their orchard.

The biodynamics allows to: 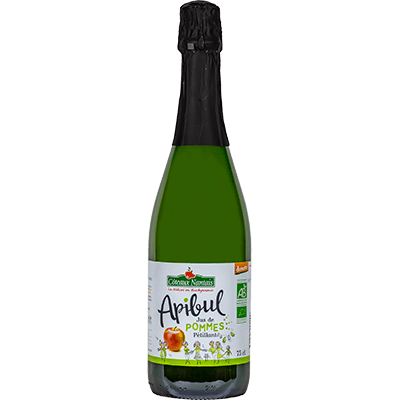 A tasty and sweet sparkling apple juice Coteaux Nantais. Nature Apibul is ideal for your aperitifs. 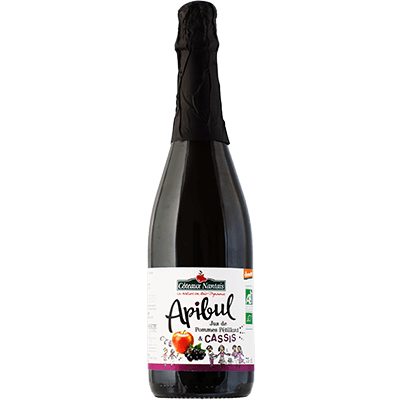 A pure organic sparkling juice with a delicious scent of blackcurrant and apples. A blend, 100% natural that will delight your guests. 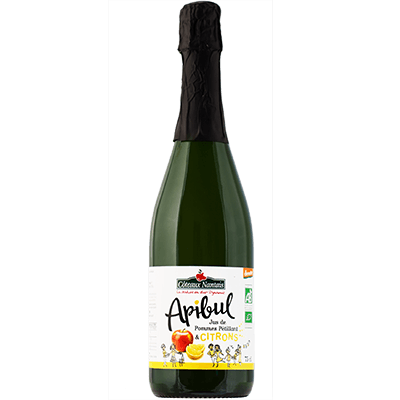 Lemon Apple Apibul is a refreshing drink ideal for your summer evenings! It has a subtle balance that is both sweet and acid! 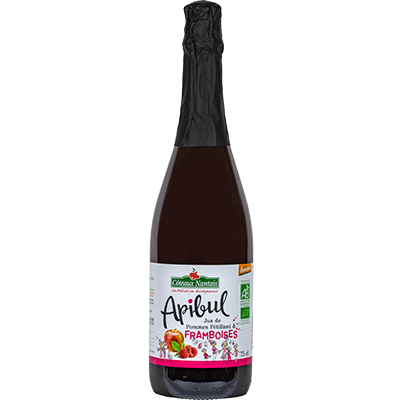 Elected "Meilleur Produit Bio 2014", Apple and Raspberry Apibul is a sparkling juice that will awaken your taste buds. Between sweetness and acidity, you will appreciate the taste to accompany your desserts or as an aperitif! 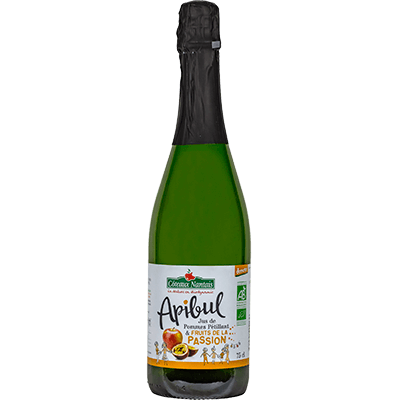 An exotic blend of apple juice and passion fruit.
To be enjoyed as an aperitif or dessert. 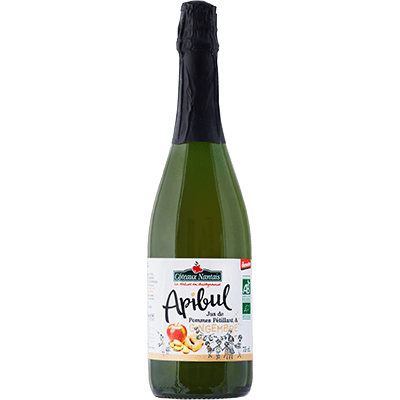 A sparkling ginger and apples from Côteaux Nantais. To consume without moderation to accompany your meals and your aperitifs 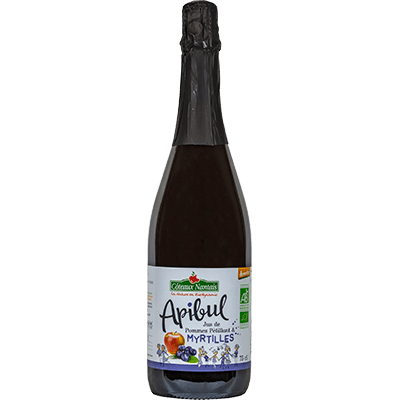 A sweet blend of apples and blueberry, ideal for cooling off, without added sugars. To serve fresh for all occasions! 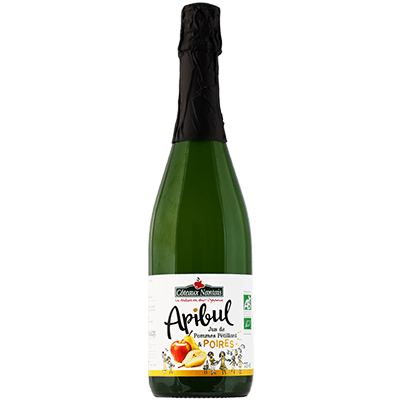 An authentic alcohol-free sparkling made from a blend of apples and pears from Coteaux Nantais, both gourmet and refreshing. An ideal base to serve as an aperitif or on a dessert 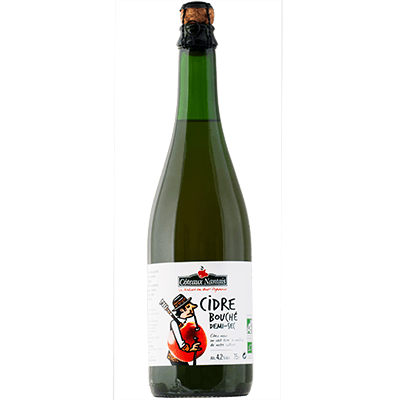 A subtle mix of cider apple varieties with a fruity taste and a bit of bitterness, giving a semi-dry cider. 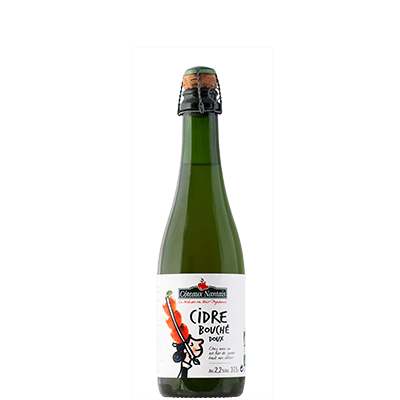 A sweet cider, made from whole apples. It is a blend of table apples to obtain a soft and fragrant cider. 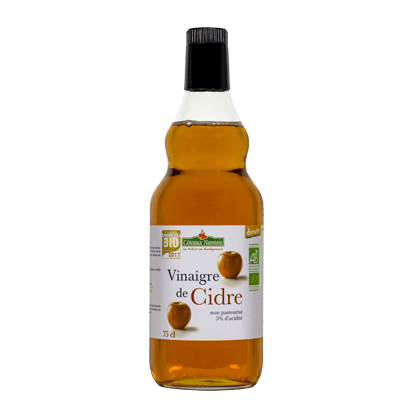 A Demeter cider vinegar made with cider from the pressing of whole apples. This cider vinegar is refined in oak casks and unpasteurized to preserve the natural qualities. 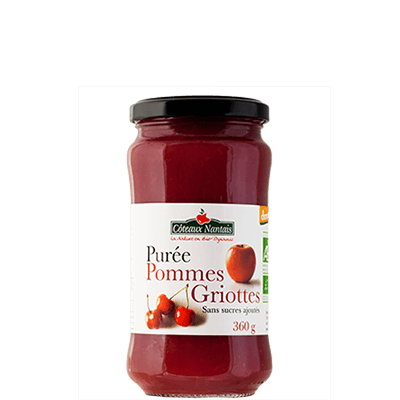 A succulent association between apple and morello cherry. This puree 100% pure fruit and no added sugars, will awaken your taste buds! 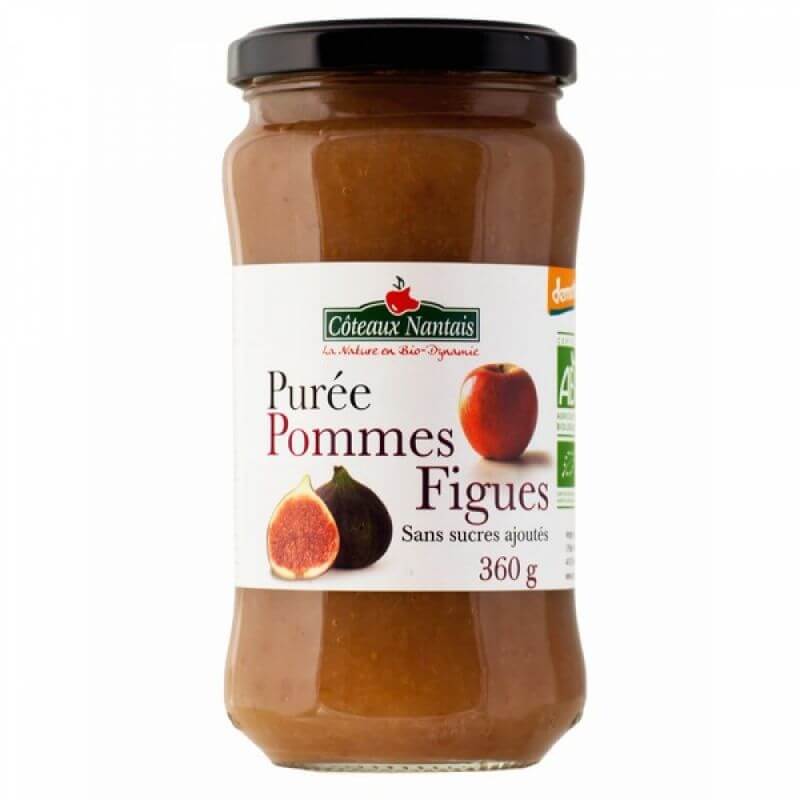 A delicious match between slightly acidulous apples and figs both crisp and delicately scented.
A sweet and light puree to enjoy whenever you want! 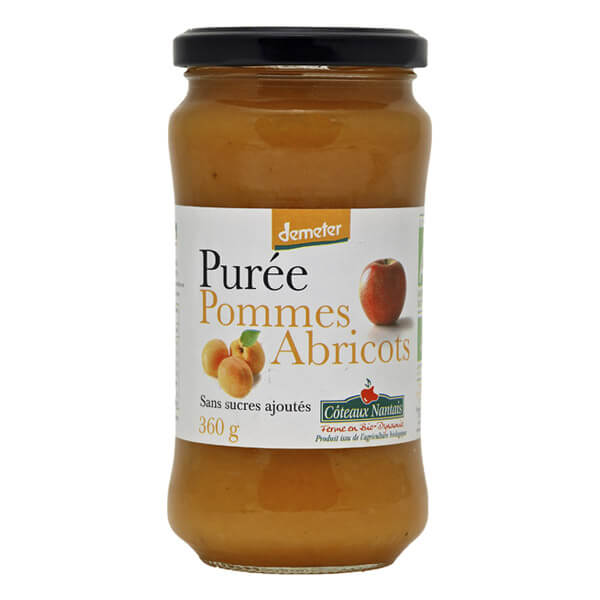 A purée mixing the sweetness of the apple and the acidity of the apricot, without added sugars. Apples and apricots are picked when ripe. This puree is to be enjoyed throughout the day. 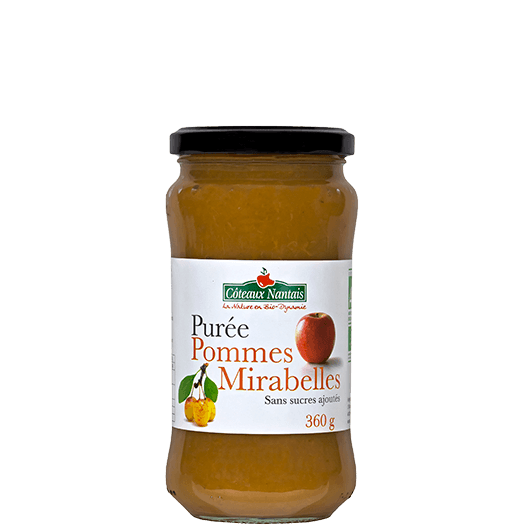 A succulent blend of Apple and Mirabelle plum. Sweet and tasty, this 100% pure fruit puree is to be enjoyed throughout the day! 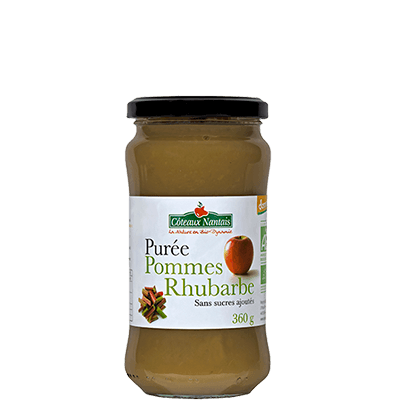 A puree mixing the scent of apples with that of rhubarb, to obtain a puree with a well-balanced flavor and no added sugars. 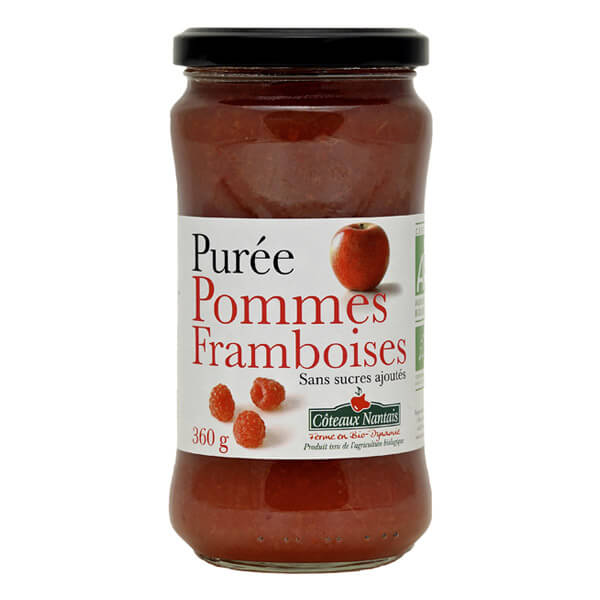 A subtle blend of apple and raspberry, this pure fruit purée and no added sugar is steam cooked in a cooking pot. 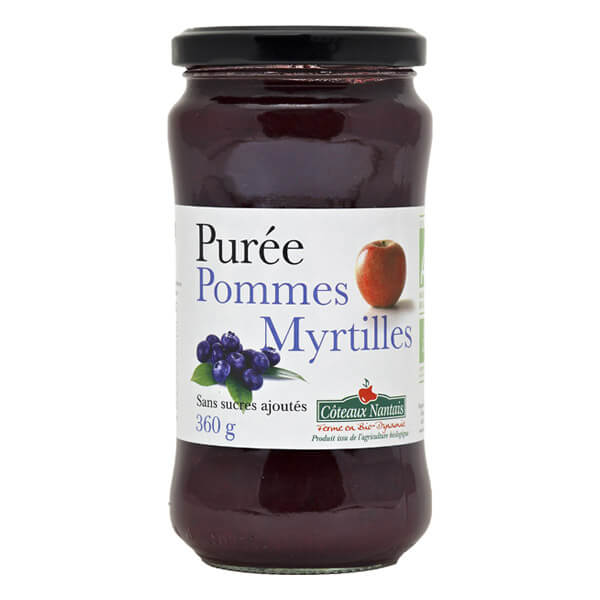 A puree combining the sweetness of the apple with the wild scent of blueberry. 100% pure fruit and no added sugars, it is steam cooked. 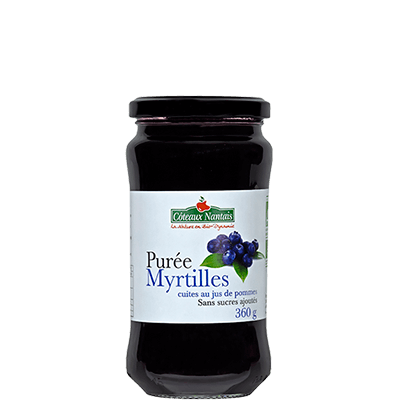 100% blueberries and apple juice puree, without added sugar. The fruits are picked at ripe and cooked in a cooking pot. Enjoy a puree with the delicious blueberry flavor. 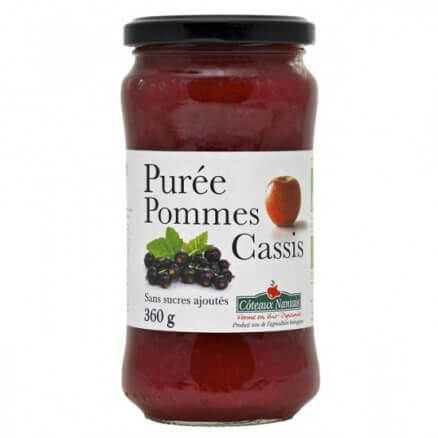 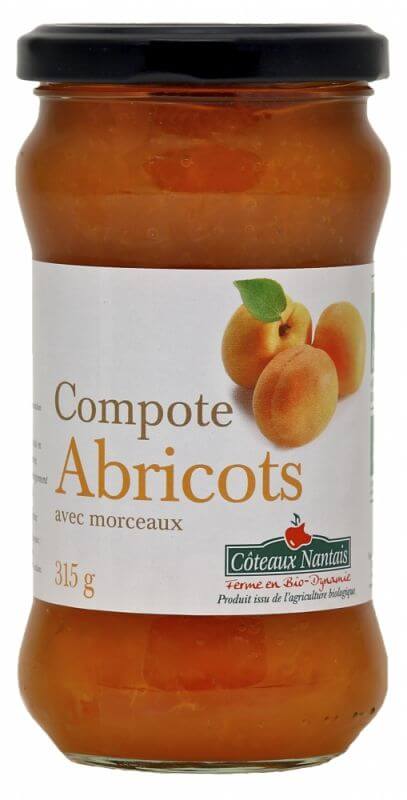 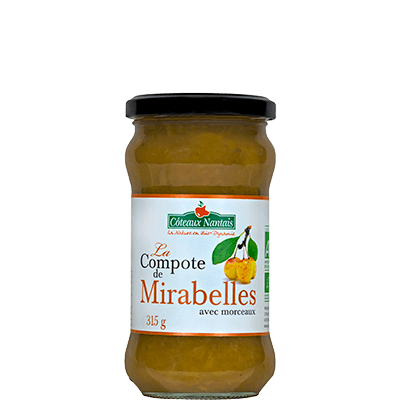 A compote steam cooked in a cooking pot. Made from Mirabelle plum, a delicious yellow plum, discover the tasty scent of this compote. 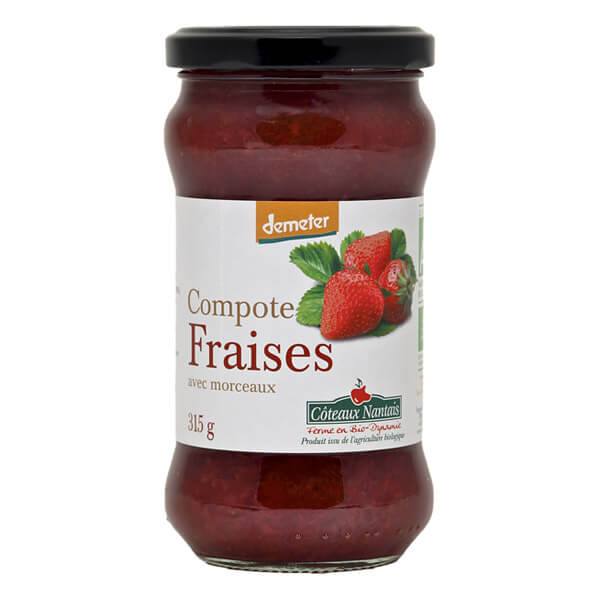 A delicious compote of gourmet and melting strawberries. Cooked gently with a cane sugar supplement, you will succumb to the delicious scent of this compote. 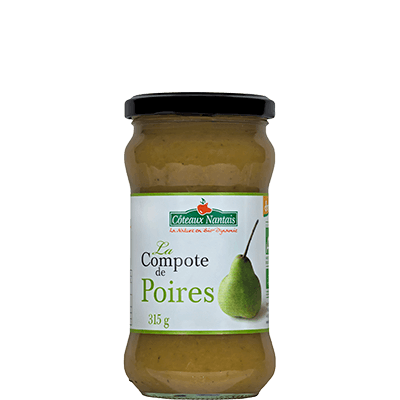 A compote composed of a mixture of pear selected for their sweetness. The preparation is steam cooked in a cooking pot 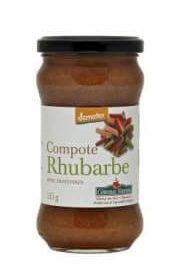 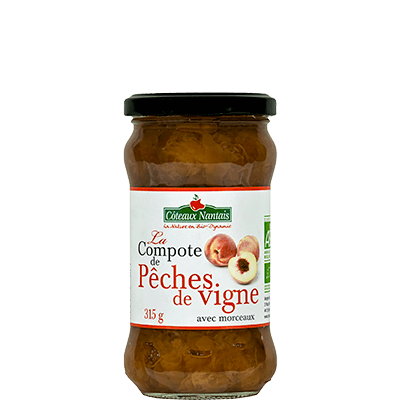 A compote made up of vine peaches and a cane sugar supplement. You will be seduced by this good taste of peach and this delicious perfume. 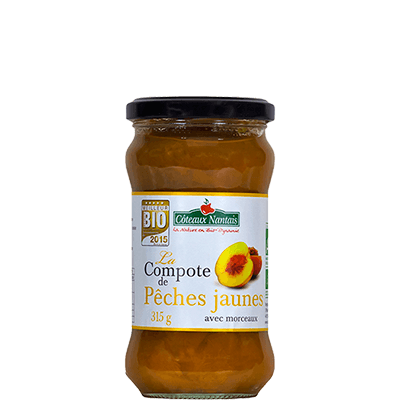 A compote with a delicious yellow peach taste. This compote is 100% pure fruit with pieces. It is steam cooked in a cooking pot with a light supplement of cane sugar.